Hagen, Germany, January 12, 2011 – “We once again achieved our targets for the 2009/10 fiscal year. Despite the financial market crisis, consolidated net sales climbed 3.7 percent to over 3.3 billion Euro, thereby surpassing our projected sales target of plus 2 percent. And at 131.2 million Euro, earnings before taxes (EBT) were just above our target range of between 120 to 130 million Euro. Our EBT margin stood at 4 percent just like in the preceding fiscal year,” said Dr. Henning Kreke, President and CEO of DOUGLAS HOLDING AG, at the Balance Sheet Press Conference in Düsseldorf, indicating that he was quite satisfied with the performance of the past fiscal year.

The performance in Germany contributed substantially to the satisfying performance on the whole. The all-important home market in Germany reported a sales increase by as much as 4.7 percent. And on a like-for-like basis, the performance delivered in Germany was a pleasing gain of 2.0 percent. Most notably, the Douglas Perfumeries, but also the Christ jewelry stores, increased their market share. Sales outside of Germany were also up by 2.1 percent. However, like-for-like foreign sales unfortunately registered a sales decline of 2.7 percent. This downturn was particularly caused by the financial market crisis hitting many European countries harder than in Germany.

The DOUGLAS Group also improved the key performance indicators in the 2009/10 fiscal year. The DOUGLAS Value Added (DVA) climbed by more than 3 million Euro to nearly 24 million Euro. The Free Cash Flow of around 88 million Euro was slightly above the preceding year’s figure, too. And, the Return On Capital Employed (ROCE) increased from 7.9 percent in the prior fiscal year to now 8.2 percent after taxes.

At almost 118 million Euro, investments were also marginally above the preceding year’s figure. In all, 72 new specialty stores were opened. The lion’s share again went towards the Douglas Perfumeries, with almost 50 new openings. In addition, 6 new Thalia bookstores and 9 Christ jewelry stores were opened. At the same time, 104 unprofitable locations were closed across Europe in the reporting year as a consequence of the store network streamlining program initiated in the previous year. Already at the onset of the economic and financial crisis, the entire store network was analyzed and it was decided to close all those stores whose profitability had proved unsustainable. This process has now been finalized.

As of September 30, 2010, the store network of the DOUGLAS Group comprised 1,973 German and foreign stores following 2,005 on the same balance sheet date one year earlier. 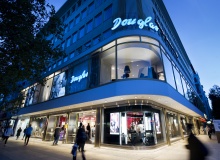 “On the whole, we are thoroughly pleased with the performance delivered in the 2009/10 fiscal year – given the ongoing financial market crisis still being perceived in several countries,” said Dr. Henning Kreke and added: “The fact that we once again surpassed our targets is largely owed first and foremost to our more than 24,000 employees. With their warmth, professionalism and dedication, our employees are and remain at the heart of the DOUGLAS Group. I would therefore like to take this opportunity – also on behalf of my Board colleagues – to express my heartfelt gratitude to each and every one of them.”

In this respect, it was particularly pleasing that the DOUGLAS Group again succeeded in welcoming 670 new trainees across Germany at the start of the 2010 training year – this is over 200 more than the year before. By means of the profound and practical training at the specialty stores or at the Service headquarters, these young graduates receive a solid foundation for their future career paths. With a trainee ratio of nearly 13 percent – which is well above the German retail sector’s average of roughly 8 percent – the DOUGLAS Group underscores its strong commitment to training young professionals.

Developments in the Group’s divisions

The Douglas Perfumeries increased their sales by 1.4 percent to nearly 1.9 billion Euro in the 2009/10 fiscal year; thus further extending their market-leading position in Europe. In Germany, the 445 Douglas Perfumeries generated sales of almost 947 million Euro; translating into growth of 2.9 percent. This allowed Douglas to gain additional market share in the all-important home market in Germany.

Sales at the 760 foreign Douglas Perfumeries reached 932 million Euro, therefore matching the prior year’s figure. Unfortunately, the solid sales performance delivered by the Douglas Perfumeries in Poland, Italy and Turkey could not compensate for the lower sales reported in Spain, Hungary, Croatia, Portugal and the Baltic States.

Quite respectable start into the new 2010/11 fiscal year

“The DOUGLAS Group’s start into the 2010/11 fiscal year produced quite a respectable performance as a whole. In the first quarter of our new fiscal year from October to December 2010 – which contains our all-important holiday business season – sales were up 4.5 percent to approximately 1.2 billion Euro, with like-for-like sales increasing by 1.7 percent. Our performance in Germany was particularly encouraging with a total sales gain of 5.5 percent and like-for-like 3.2 percent. Sales growth abroad was somewhat more reserved with first-quarter sales rising by only 2.7 percent. Like-for-like sales outside of Germany were down 1.1 percent,” commented Dr. Henning Kreke.

Within the corporate divisions, the Douglas Perfumeries accounted for sales growth of 2.8 percent in the first quarter. In this respect, the most pleasing performance was delivered in Germany, where Douglas achieved a sales gain of 4.8 percent. The Thalia group’s sales were up 7.2 percent. An above-average performance was given by the Christ jewelry stores with a sales plus of almost 10 percent. The performance of the AC fashion stores was also encouraging, which with a sales plus of 1.6 percent, they succeeded after a long time in once again generating sales growth in a quarter. The Hussel confectionery shops matched the prior year’s level.

The DOUGLAS Group had already decided in the 2008/09 fiscal year to close those locations with no indication of sustainable profitability and to withdraw from those countries where we could not foresee attaining market leadership. As a consequence of this analysis, Douglas withdrew its presence from Denmark and the USA in the 2009/10 fiscal year.

And most recently as per December 30, 2010, the Russian Douglas Perfumeries were sold. Even though Douglas was satisfied with the performance in Russia as a whole, attaining a market-leading position on the Russian market would have required substantial investments. Due to the size of the competitors, Douglas would have hardly achieved this on its own. Furthermore, Douglas was under the impression that the rent levels on the Russian market are still very challenging, which is why the conclusion of new leases at terms and conditions acceptable to Douglas, therefore, appeared to be rather uncertain in the long run.

Therefore, the 32 Russian Douglas Perfumeries with annual sales of currently approximately 55 million Euro were transferred to Rustiset Holdings Limited. Rustiset Holding is a shareholder of the Russian cosmetics and perfumery chain, Rive Gauche. Consequently, Douglas has withdrawn from operations in Russia. The Douglas brand name however will remain present – based on a license agreement – for some time on the Russian market. The license agreement prescribes that Rustiset Holding is allowed to operate the existing Douglas Perfumeries under the Douglas trademark in Russia for a term of three years.

“Following our withdrawal from Denmark, the USA and now also Russia, we now once again possess a healthy store network across Europe with growth potential. And on this basis – we can now really take-off,” said Dr. Henning Kreke confidently about the future, after all, “with an equity ratio of nearly 45 percent and our solid net assets, financial position and result of operations, we are strongly placed to further extend our position as a leading European lifestyle retail group.”

To this end, a capital expenditure volume of around 125 million Euro has been set aside for the 2010/11 fiscal year. Approximately 65 million Euro has been earmarked for the Douglas Perfumeries. These funds will go toward opening 50 to 60 new stores, upgrading the existing store network and expanding online operations with the aim of strengthening the leading market position in selective cosmetics and the Internet. The expansion activities will focus in the stationary area on countries in which the Douglas Perfumeries already lead the market or can expect to within the foreseeable future.

February 16, 2011 Subeditor PEOPLE & JOBS Comments Off on L’Oréal announces the reunification of the roles of Chairman of the Board of Directors and Chief Executive Officer of the Group