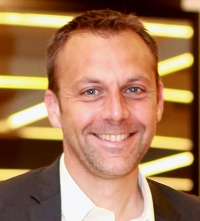 The 37 year-old Frenchman Vincent Senecat is “Galeries Lafayette” through and through: His professional career began with an apprenticeship in the dependence of the company in Dijon. Afterwards he worked as a salesman in the men´s department, then he was area manager and head of department at the Galeries Lafayette of Montargis and Reims.

Now, he was appointed the leader of the department store of Berlin.

Vincent Senecat considers his new role as a special challenge: “I am looking forward to the development of the Galeries Lafayette outside of France.

The most important goal for me is to strengthen the service orientation of the house. Our customers should be treated like guests, to feel comfortable and the visit in our department store should be a very special experience for them.

Senecat also continues to focus on events as a customer loyalty tool, furthermore he wants to focus on the own brands of the Galeries Lafayette and to pay particular attention to plan a major renovation on the ground floor of the house.

Hagen, August 10, 2011 – The DOUGLAS Group remains on track. “All in all, we are satisfied with the trends during the first nine months of the current fiscal year,” said Dr. Henning Kreke, President […]

Douglas in the third quarter – increase in sales and profitability

August 23, 2022 Subeditor COMPANIES Comments Off on Douglas in the third quarter – increase in sales and profitability