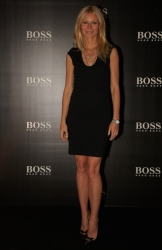 BOSS Fragrances is delighted to announce the signing of internationally renowned actress and fashion icon Gwyneth Paltrow as the face of its new female fragrance, BOSS Nuit Pour Femme. The elegant and sublimely feminine new scent is inspired by the most iconic symbol of feminine style – the little black dress – and the unique feeling it inspires in a woman, of being ‘perfectly put together’. Gwyneth Paltrow will star in the new TV, print and online campaigns, rolling out in Germany from end of July.

As an Oscar-winning actress, accomplished singer, celebrated lifestyle and fashion icon, cookbook author, entrepreneur, wife and mother, Gwyneth Paltrow is the epitome of today’s multi-faceted modern woman and the perfect ambassador for BOSS Fragrances, which are synonymous with inspiring people to achieve their potential for success. Confident, self-assured, hard-working and supremely successful, her flawless style, charisma and elegant femininity make her the natural expression of BOSS Nuit Pour Femme.

“We are delighted to welcome Gwyneth Paltrow to the HUGO BOSS family as the face of our new BOSS Black female signature scent. Her effortless style, captivating beauty and remarkable achievements make her a true icon of female success; and just as BOSS Nuit Pour Femme is the perfect complement to a woman’s ultimate night out, she is the perfect complement to BOSS Fragrances.” Gerd Von Podewils, Global Marketing Director for HUGO BOSS Fragrances, P&G Prestige

“We strongly believe in the ongoing and future success of our Womenswear and I’m extremely excited that BOSS Fragrances will complement this success by staging a major launch into the world of female fragrance with BOSS Nuit Pour Femme, starring globally acclaimed actress Gwyneth Paltrow.” Claus-Dietrich Lahrs, CEO HUGO BOSS AG

The daughter of Tony Award-winning actress, Blythe Danner, Gwyneth followed in her mother’s footsteps, making her stage debut at just five years old. Following a string of illustrious starring roles in films such as The Pallbearer (1996), Emma (1996), Great Expectations (1998), and Sliding Doors (1998) she confirmed her superstar status with an inspired performance in 1998’s Shakespeare in Love that won her a Best Actress Oscar, a Golden Globe Award and two Screen Actors Guild Awards, firmly establishing her as one of Hollywood’s most sought-after actresses. She earned a further Golden Globe nomination for her role in Proof (2005), and won an Emmy Award in 2011 for her role as Holly Holliday in the TV show Glee.

Blessed with multiple talents, Gwyneth Paltrow has also enjoyed success as a singer, debuting her talent to the world in the 2000 film Duets, in which she performed a cover version of Smokey Robinson’s “Cruisin'” that was released as a single and went to number one in Australia. She is also the owner of the lifestyle company Goop.com and author of a cookbook My Father’s Daughter: Delicious, Easy Recipes Celebrating Family & Togetherness. Gwyneth Paltrow has been married since 2003 and has two children.

According to news in Le Figaro newspaper, William Koeberle, CEO of the group, last Monday also took over direct responsibility for the leadership of the largest subsidiary of the group in France. With a market […]

Douglas is acquiring a majority stake in NICHE BEAUTY